By Oscars Mum | August 2, 2010 - 9:15 pm |April 27, 2012 Amines, Low Chemical / Failsafe, Low Glutamates, Low Salicylates, Recipe, Snacks
I’ve had a few attempts at making muesli bars, and after a bit of trial and error I’ve finally come up with a recipe that works.  They look pretty similar to commercial muesli bars.
I take the nut-free version to my son’s daycare centre to have when the other kids have commercial muesli bars.

A bit of chocolate could be drizzled over the top once they cool, to make them look like commercial ones.  I’m also trying to come up with a yoghurt coating that is similar to the commercial varieties. 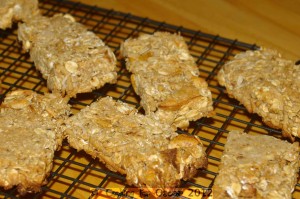 1.  Drizzle some melted chocolate (Amines) over the top.

2.  Use rectangular muffin/mini-loaf trays to make the individual bars, instead cutting them.