The 25th of April is ANZAC Day in Australia and New Zealand.  For my overseas readers, ANZAC Day is the day we remember and commemorate the men and women who have fought for our country.   ANZAC stands for Australian and New Zealand Army Corps.   “The Anzac tradition—the ideals of courage, endurance and mateship that are still relevant today—was established on 25 April 1915 when the Australian and New Zealand Army Corps landed on the Gallipoli Peninsula.  It was the start of a campaign that lasted eight months and resulted in some 25,000 Australian casualties, including 8,700 who were killed or died of wounds or disease.  The men who served on the Gallipoli Peninsula created a legend, adding the word ‘Anzac’ to our vocabulary and creating the notion of the Anzac spirit. By the 1920s, Anzac Day ceremonies were held throughout Australia. All States had designated Anzac Day as a public holiday. In the 1940s, Second World War veterans joined parades around the country. In the ensuing decades, returned servicemen and women from the conflicts in Korea, Malaya, Indonesia, Vietnam and Iraq, veterans from allied countries and peacekeepers joined the parades. “[1]

The ANZAC biscuit came about  during World War 1 when “the wives, mothers and girlfriends were concerned for the nutritional value of the food being supplied to their men. Here was a problem. Any food they sent to the fighting men had to be carried in the ships of the Merchant Navy. Most of these were lucky to maintain a speed of ten knots (18.5 kilometres per hour). Most had no refrigerated facilities, so any food sent had to be able to remain edible after periods in excess of two months. A body of women came up with the answer – a biscuit with all the nutritional values possible. The basis was a Scottish recipe using rolled oats which were used extensively in Scotland, especially for a heavy porridge that helped counteract the extremely cold climate.  The ingredients they used were rolled oats, sugar, plain flour, coconut, butter, golden syrup or treacle, bi-carbonate of soda and boiling water. All these items did not readily spoil. At first the biscuits were called Soldiers’ Biscuits, but after the landing on Gallipoli, they were renamed ANZAC Biscuits.”[2]

There are many versions of the ANZAC biscuit available on the Internet and no-one really knows what the original recipe was.  I suspect it varied depending on who made them and what ingredients were at hand (it was war time after all).   The Department of Veteran’s Affair’s has a recipe from the time of the Gallipoli landing.  I modified it a bit to make my version (I’m not a soldier, I don’t need quite so much sugar to keep me going!), which contains fresh coconut (although this is optional).  I also used barley malt syrup for the first time in this recipe.  Barley malt syrup isn’t in the RPAH Elimination Diet handbook, but I suspect it contains amines, as it is made using a process that feeds into making malt vinegar, which is moderate in amines.  The version using Barley malt syrup were the best ANZAC biscuits I’ve made.  This is probably because it has a much stronger flavour than golden syrup, more like treacle or molasses.  It also has a strong smell, like Vegemite or beer, but doesn’t taste like either of those!  If you’re able to have amines, this may be worth trying.  If you are going to try it, use the Spiral Foods Organic Barley Malt; Ceres Organic also has it, but it contains lemon juice.  Having said all that, the golden syrup version are pretty good too.

If you haven’t voted for me yet in the Best Australian Blog People’s Choice Awards – please vote for me here. 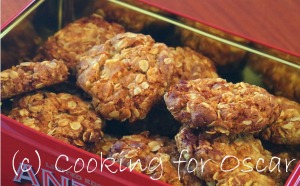 Barley malt syrup isn't in the RPAH Elimination Diet handbook, but I suspect it contains amines, as it is made using a process that feeds into making malt vinegar, which is moderate in amines.  If you're able to have amines, this may be worth trying as a challenge.  If you are going to try it, use the Spiral Foods Organic Barley Malt; Ceres Organic also has it, but it contains lemon juice.   Use Golden Syrup as a substitute, but you may like to add a bit more sugar as it is not as sweet.