Cooking for Oscar » Miscellaneous » One for the dogs!

One for the dogs!

By Oscars Mum | September 26, 2011 - 7:42 pm |June 18, 2012 Miscellaneous
This one definitely doesn’t have anything to do with Oscar, but I thought it would be fun to share anyway.  Believe it or not, our dog Dermie also has allergies.  He is allergic to things in the environment such as mould and some plants, fleas and food.  He gets very itchy feet which he licks until they are raw and breaks out in sores all over his tummy, tail and bottom. 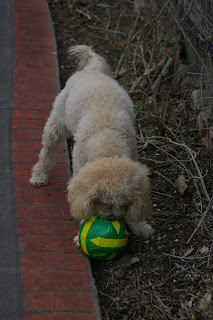 While Oscar was doing his elimination diet and challenges, we had to do the same for Dermie.  Luckily his was a bit easier – first we did 4 weeks on ultra hypo allergenic food (no sores) then 4 weeks giving him everything under the sun (sores appeared).  So the poor thing had his diet limited to the same boring (and very expensive) hypo allergenic food.  We then did food challenges with raw chicken and bones to give a bit of variety, which he passed.  But that left the problem of treats.  By chance I found some dried chicken treats at a farmers market, made from just thinly sliced raw chicken dried in a food dehydrator.  He loved them, so I decided to give them a go myself.

Its a pretty simple process: thinly sliced chicken breast fillets (thighs also work but have an oily residue) dried for about 8 hours, or until all the moisture has been removed.