Do they know it’s Christmas?

I was 12 years old when “Do They Know its Christmas?” was released and I remember thinking that it would change the world, that we would stop the famine in Africa and save all those people on TV. It was released on November 29th 1984 – 27 years ago.

Nostalgic?  Watch the original video here: Do They Know its Christmas 1984 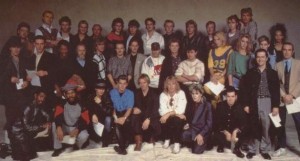 I don’t know why, but that song came into my head this morning, and it made me think what an amazing feat that song and the subsequent global event Live Aid was.

On the 13th July 1985 my younger brother and I watched the entire Live Aid concert – all 16 hours of it!  For those in Australia that meant staying up all night (and boy did I fell crap afterwards), but it was soooo exciting.  We were at my Grandfather’s house, camped out on the lounge room floor.  And I think we even had coffee!  It was such as an amazing feeling – of helping people and being connected to millions of people around the world.

72,00 people were at the concert at London’s Wembly stadium and 100,000 at JFK stadium in the US.   It was one of the largest satellite link-ups and television broadcasts of all time; with an estimated global audience of 1.9 billion, across 150 nations, watching the live broadcast.  And we managed all of this without the internet,email, social media, facebook, twitter….. etc.

Today, Cooking for Oscar is a supporter of WeFeedBack, the United Nations social media initiative to feed hungry children in Africa.  It’s another opportunity to come together globally to fight the chronic hunger that affects millions of families around the world.

Some facts about hunger (source: WeFeedBack):

Making the world a better place starts with food. Food fuels education. Food fuels free choice. Food fuels economic independence. Food fuels peace. That’s why WeFeedback and WFP are determined to break the cycle of hunger. We need your support. Please join us.  So this Christmas, please consider giving something up as part of your celebrations, and donating the money you would have spent to WeFeedBack.

I know times are tough, so if you can’t make a monetary donation, consider giving up your time to play Free Rice.  Every answer you get correct donates 10 grains of rice to the World Food Programme.  I’ll even forgive you for not reading my next post if you play instead!

And now, the lyrics:

It’s Christmas time,
there’s no need to be afraid.
At Christmas time
we let in light and banish shade
And in our world of plenty
we can spread a smile of Joy
Throw your arms around the world
at Christmas time.

But say a prayer,
Pray for the other ones.
At Christmas time it’s hard
but when you’re having fun…
There’s a world outside your window
and it’s a world of dread and fear
Where the only water flowing is
the bitter sting of tears
Where the Christmas bells that are ringing
are the clanging chimes of Doom
Well, tonight thank God it’s them instead of you.

And there won’t be snow in Africa this Christmas time
The greatest gift they’ll get this year is life.
Ohh….
Where nothing ever grows
No rain or rivers flow
Do they know it’s Christmas time at all?

Here’s to you…
Raise a glass for everyone
Here’s to them
Underneath that burning sun
Do they know it’s Christmas time at all?