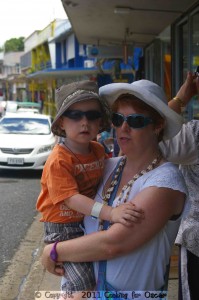 Two weeks ago we were in Fiji for an 8 night holiday.  For most families this is not unusual, but travelling with a child with food intolerances has a few unique challenges.  This isn’t the first time we’ve taken Oscar overseas, 18 months ago we went to Vietnam, and the success of that trip has given us the confidence to continue to take him travelling.   However, we may have to rethink the tropical destinations for awhile.  A heat rash turned into eczema, which was very uncomfortable for him and required steroid treatment to clear it up.  But it didn’t affect his overall attitutde to the holiday, which was very positive.  He had a great time, and wore himself out swimming and playing at Kids Club.  He told me on the plane home (before it had even taken off) that he missed Fiji. 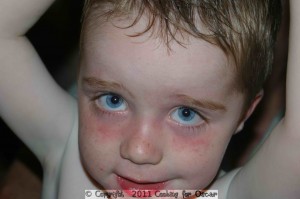 As with the Vietnam trip, quite a bit of planning went into what Oscar would eat over there.  We were staying at a resort and knew we would be eating there most of the time.  Sometimes finding out what a particular food is, let alone what ingredients it contains, can be difficult or impossible, so our strategy was to take with us what we could, and to choose foods that were as safe as possible, avoiding anything that was going to be an obvious problem, such as spicy dishes.  Oscar is able to have Amines and can now tolerate moderate salicylates, and is being reintroduced to high salicylates, so there was more flexibility this time

The foods we took with us included:

For Vietnam I took tinned pears with us, but I didn’t think they’d be necessary with bananas and paw paws available in Fiji.  One thing I wanted to take, but couldn’t get was Uncle Tobys Microwaveable Bowl Oats Original. These can be made with just boiling water, which is handy for hotel rooms.  However, after searching 6 different Supermarkets I contacted Uncle Tobys and was told they have been discontinued due to declining sales.  The flavoured ones are still available, so they obviously sell better.  As Oscar is really into his porridge I took a couple of the brown sugar and cinnamon ones, just in case (the cinnamon was at the end of the ingredients list so would be a pretty small amount), but didn’t need them.  Although Hubby ate one before his early morning fishing trip.

We also took our travelling pharmacy, all things we might need if reactions occurred, eczema being the most likely:

(Unfortunately all of these medications are “flavoured”, so giving them adds more salicylates to the system)

Breakfast was pretty easy.  Oscar had pancakes every day with bananas and his own maple syrup.  The breakfast buffet included smoothie shots, made with either banana, paw paw or strawberries and milk and honey (high salicylates).  Oscar had them on the Banana  and Paw Paw days; given the size of the glass the honey intake was pretty small.  He also occasionally had toast with butter and cheese or rice bubbles and tinned pears.   He tried the carrot and celery juice, but decided milk was better.

The first time we ate at the resort Oscar told me that he wasn’t going to eat any vegetables while on holiday, and he was pretty true to his word – chips don’t count as vegetables!  Lunch was quite often a toasted cheese sandwich (with chips) or Fish and Chips.  As a drink he would have lemonade or banana smoothies (made without the honey).  For dinner he would have eaten Fish and Chips every night if we let him, but we did manage to get a little variety in, including pizza (ham and cheese on a pizza base, no tomato or other sauces), chicken drumsticks with mashed potato, chicken fettuccine (cooked with mushrooms, but he didn’t eat those), Sheperd’s Pie (of which he only ate the mashed potato top and small amount of the meat.  He did finally eat some vegetables.  After complaining that he couldn’t see in the room after we turned the lights out, I told him that was because he wasn’t eating any carrots.  After that he ate carrots whenever they were served.  Dessert was usually ice cream (chocolate or vanilla) or fruit (banana and paw paw).

The food we brought with us was given as snacks, but as special treats he also got to have lemonade icy poles and plain chips (in the packet)

Food on the plane was easy on the way over.  We had a 2.30am flight from Australia, so we ate a late dinner before going to the airport.  I took some bananas with us (which Oscar sat on while waiting in the line at the security check!) and some Sour Cream Banana Muffins.  I’d made the muffins during the week (based on a recipe from kidspot) then put them in the freezer until it was time to go.  There was supper served on the plane (Oscar and I slept through that), but no breakfast, so the bananas and muffins saw us through the wait at the airport before we got on the plane then as breakfast on the plane, and the muffins were still good for morning tea on the way to our resort.  The recipe for the muffins is below, I chose a recipe with sour cream as this tends to keep them moist for longer.  On the plane trip home there was dinner, but we also took some biscuits, rice crackers and Tumbles bars as snacks for the trip to the airport.   Oscar ate the bread roll and butter on the plane and picked out the chicken and carrots from his noodle dish.  He didn’t like his chocolate mousse! 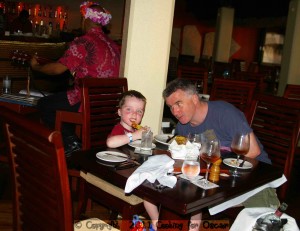 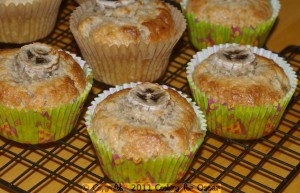