Travelling and Eating in Vietnam

We have just arrived back from 12 days holiday in Vietnam, Oscar included.  Vietnam is probably not the easiest place to take a child with food intolerances, as it is almost impossible to find out what ingredients are in food.  But, with a lot of planning we made it through the holiday without Oscar having any food reactions.


Our plan was to stick to Oscar’s diet as much as possible for breakfast and snacks and pick the “safest” option for lunch and dinner.  We didn’t expect to be able to buy much from the safe list (other than bananas and pawpaws) and didn’t want to spend all our time there trying to find food either, so we took what we could with us.


The food we took with us for 12 days included:

All of this took up quite a bit of space in our suitcases, but the upside was that once all the food and nappies had been consumed we had an empty suitcase that we could fill with shopping.


Because we were flying overseas the food we took for the flight had to comply with the liquids and gels limit of 100 ml/100 g per container and all the items to fit in a 25 x 25cm zip lock bag each.  In our hand luggage we took a couple of 100g Choc Rock yogos, and a small container of jam, a tin of creamed rice, bananas, pears, a packet of croissants and the powdered milk.  To keep the jam and yogo cold I bought a thermal bag (smash brand) that doesn’t need ice and a packet of the smallest gel ice packs I could find (also by smash).  I included one of these in the zip lock bag with the jam, yogo and creamed rice and had no problems going through security with it.  We took powdered milk because I couldn’t find any UHT milk containers that were 100ml or less.   There is supposed to be an exception for liquids that are food or drink for babies and children but I think it depends on which security person you get as to whether they will let something bigger through.  We didn’t need the powdered milk on the plane, as we were able to get it as part of the drinks service.  It did come in very handy though when our flight was delayed landing for 3 hours and we arrived at our hotel too late to go out and buy any.


Breakfast for Oscar consisted of Rice Bubbles or porridge with milk/water to drink followed by something from the breakfast buffet at the hotel – scrambled eggs on toast, bananas, pancakes/toast with butter and/or pear jam and, not to be left out when his parents pigged out on the pastries, a chocolate croissant.  Unlike his parents, Oscar wasn’t greedy, he pulled the croissant apart and only ate the chocolate centre!


Snacks came from the food we brought with us, plus we supplemented and provided variety with icecreams and drinks when we were out:

We were also able to buy raw cashews, milk, bread to have with pear jam and plenty of bananas.


Lunches and dinners were a bit harder.  We tried to pick the safest option from the menu, which was usually a western meal, such as chips, chicken nuggets, fish fingers and pastas with cream sauces.  Not the healthiest diet, but the nuggets and fish fingers and some of the chip servings were freshly made, not the commercial  variety, so preservatives were less likely.  We also let Oscar try anything on our plate that he was interested in (apart from the chillies and really spicy food), and he did try some noodles and spring rolls. 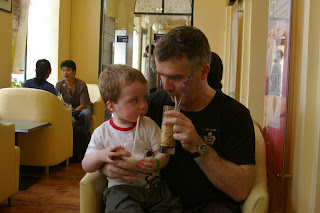 Some other things we found useful for travelling overseas with a toddler included some great products from Little Gulliver – the CARES child safety restraint for use in planes, the Cushie Traveller folding toilet seat, the kids inflatable neck cushion, the Wrist Buddy for keeping us tethered together when out walking in crowded places, and the Little Gulliver disposable wrist bands for recording Oscar’s name and our details in case he got lost..


We also took a DVD player (cheap one from Dick Smith) – which was great on the plane when the lights were turned out and the entertainment system didn’t work – an MP3 player, and a set of Moshi Kids Headphones which are volume limited to protect kids ears, no matter how loud the volume on the device is.


Oscar carried (some of the time) his own backpack which contained some new and old favourite books, sticker books, Crayola twistable crayons (they don’t break when dropped) and colouring books, a special toy and a mini doodle.  I also took extra new books, colouring books and sticker books for the trip home and as a distraction at other times.

2 Responses to Travelling and Eating in Vietnam