One of the foods that Oscar really loved in Japan was pork cutlets.  In fact it was the first time we’ve been able to get him to eat pork, so of course I had to find out how to make them.  They are quite smple really, just meat coated in bread crumbs and deep fried.  I don’t like deep frying, so I shallow fried instead and they cooked just as well.  The Japanese recipes (I modified one from La Fuji Mama) use Panko, which is a type of breadcrumb made from bread that is cooked using an electric current (not sure exactly what that means!).  They are more like flakes than crumbs, and can be bought in asian grocery stores.  Not knowing what was really in them I decide to use normal bread crumbs, and they worked just fine.  For the sauce I used Failsafe Foodie’s Magic Sauce, which was an excellent substitute for the sauce in the original recipe.

Pork does contain amines, so this recipe is not suitable for the strict Failsafe or Elimination diets, but you can use it for an amines challenges, or if amines are tolerated.  The pork can also be substituted for chicken fillets or a mince meat patty, like a croquette. 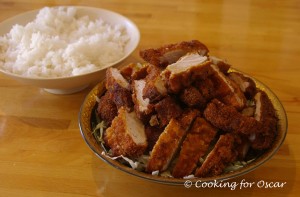 The word "Katsu" refers to any deep-fried meat cutlet coated with flour, egg, and bread crumbs.  I haven't tried making these variations yet, but the same method and ingredients can be used to make:

Refer here for the recipes for Bread Crumbs and Failsafe Foodie's Magic Sauce.