We arrived home on the weekend after two weeks holiday in Japan.  Japan was a fantastic country to travel in (very easy despite the language difference) and the food was delicious.  Our first few days there we stayed with an old friend of mine and got to have home cooked Japanese food – and lots of it!  We also got to visit a supermarket.  The supermarket was huge and so were the vegetables – spring onions the size of small leeks and enormous apples (apparently Australia grows big ones for Japan and leaves the small ones for us).  Food prices weren’t terribly different to here.  Milk was $1/litre, but I don’t know if their farmers are being screwed on prices.  The other amazing thing about Japanese food is that you can get almost anything in a can – coffee, tea with milk, all sorts of alcoholic drinks – and you can by them from vending machines on the foot path! 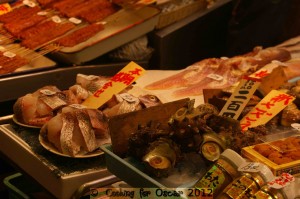 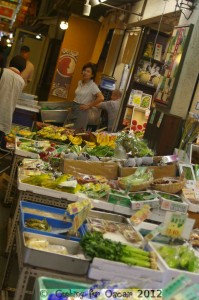 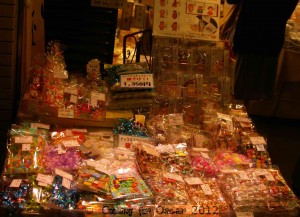 Oscar went surprisingly well in terms of food reactions.  While he didn’t eat a full-on Japanese diet each day, he did have enough each day for us to expect more of a reaction.  On the second last day Oscar developed a rash on his chin and above his top lip.  It has slowly built up and he has little red itchy patches in various places over his body now, but they are settling down and the patch on his chin and lips has gone all dry, cracked and scaly.

We took some food with us, both for the trip over (15 hours from home to hotel) and as snacks while travelling.  We headed off at 4.30am when we lifted Oscar out of bed and put him in the car, with a drink of warm milk to help soften the blow.  The first part of the trip was a domestic flight, so I could take a little container of milk (150ml) through security and a bowl of cereal for his breakfast.  The flight included 2 meals (we flew Jetstar and didn’t order a meal for Oscar), so I packed some cold cooked sausage rolls and ham, zucchini and carrot muffins for lunch and dinner.  As snacks I packed two 100ml yogurt squueezy packs (frozen which helped to keep the other foods cool), some drained pears in syrup, plain Arnotts biscuits, rice crackers, muesli bars (NoNos Cocoa Crush Bars), two 100ml Aunt Betty Creamy Rice tins and some lollies .  As we were travelling on an international flight we had to comply with the security limitation on liquids, aerosols and gels.  Each person is allowed a 20 x 20cm zip lock bag containing as many 100ml or less containers that can comfortably fit.  Medicines are exempt, and we had a letter from our doctor, but we still used one of our bags for essential medicines for Oscar (ventolin, Prednisolone and steroid creams).  In the two remaining bags I packed the yogurts, creamy rice and a couple of small ice gel packs to keep everything cool.  We packed more of the same in our suitcase, plus some pear jam and a box of Special K and some porridge sachets (we knew at least one of our hotels had a microwave).  The only foods that needed to be declared in Japan were fresh plant and animal products, meat products and rice.  The left over muffins and sausage rolls went into the bin at the airport (they had served their purpose well) and I declared my four 100ml tins of creamy rice, but we weren’t even stopped.

Most of what Oscar ate fell into the “probably OK” category.  Foods such as pancakes, rice, noodles, vanilla yogurt, fried/crumbed chicken/pork, french fries, vegetable/chicken filled sushi rolls  and bread were his staples; they should be OK but without knowing the ingredients there would probably be something in them that wasn’t – preservatives, colours, flavours, etc. 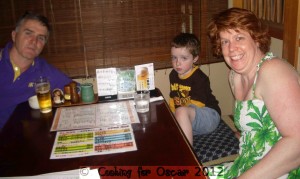 Oscar photographed his own food 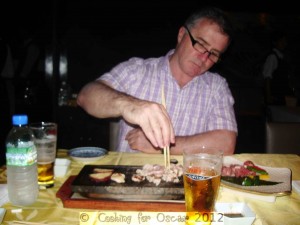 We took food with us whenever we could – jam and banana sandwiches/rolls were popular – even to Disney Land (which, by the way, was awesome).  But there were times when there weren’t any “good” options and we had to make do, like the day we visited the Railway Museum.  The safest option was the kids meal with crumbed prawn and other things (chicken or pork), rice with tomato sauce (which we scrapped off) and a horrible looking hamburger.  Oscar ate the crumbed pieces, was very particular about not eating any grains of rice with tomato sauce on them, and to our surprise loved the hamburger and scoffed it down really quickly.  We swapped the orange juice for a “melon flavoured soft drink” – I’m not sure if that was better or not :), and there was a pear tasting jelly.  Luckily these situations were not frequent and we managed to keep him pretty stable. 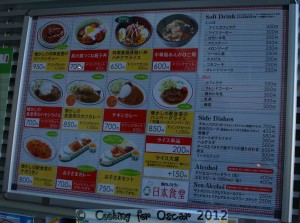 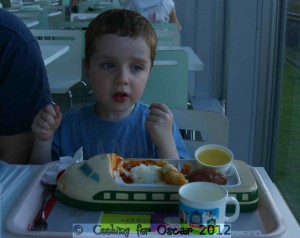 There were also some surprises, such as in the town of Kawagoe, where we stopped for an ice cream.  The choice was yellow or purple – we chose yellow.  Turns out they were both sweet potato icecream (orange and purple varieties) and it was delicious!  Kawagoe also had lots of other sweet potato delicacies, as that is what the area is famous for. 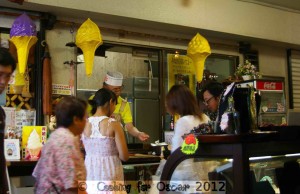 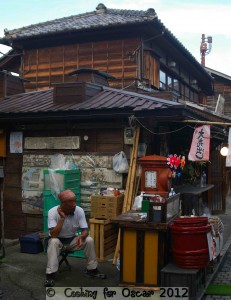 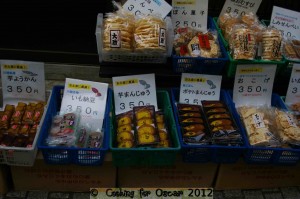 There was lots of food inspiration in Japan that I hope I will be able to do justice to – Oscar style of course!

While we were away I had all my posts and recipes pre-scheduled.  I didn’t have a recipe prepared for today’s post, so to keep with the Japanese theme, I’ve updated and reposted my sushi recipe. 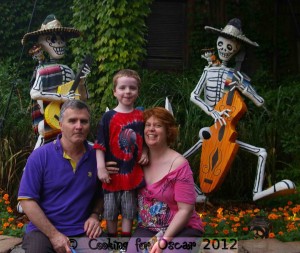 Us at Tokyo Disney Sea

Easy home made sushi, with or without seaweed (nori).

For the Sushi Rolls:

For the Tezu: (Optional)

For the Dipping Sauce:

Nori and Rice Vinegar are likely very high in glutamates, salicylates and/or amines.

This recipe made 6 large rolls, which are cut into 6 pieces each.

Refer here for the mayonnaise recipes and Golden Marinade recipe to use with the fillings.

2 Responses to Travelling to Japan