Cooking for Oscar » Amines » Buns for Easter, or Any Time!

Buns for Easter, or Any Time!

There is a wonderful tradition in Sweden of eating buns for all occasions.  All sorts of buns are available.  I once tried to make Swedish Semla, which is a spiced bun made for lent that is filled with almond paste and cream.  My yeast skills weren’t very good then and I ended up with a big horrible sticky mess that took hours to clean off the bench top!  I’ve made several Swedish style buns since then, but much simpler than the semla.  I decided to make some Swedish buns for Easter and thought that the cute “Bunny Bread” image being shared around Facebook would be a good idea.  As we all later found out, the bunnies were actually made with a biscuit dough, but we had a good laugh at some of the not-quite-bunnies that were produced,  including my “guinea pigs”. 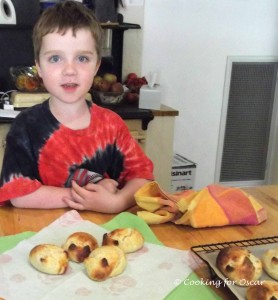 I decided to have another go, but this time with a more traditional style bun – shells (or snails).  These are traditionally topped with flaked or chopped almonds or Pearl sugar.  Pearl sugar is a bigger sugar crystal that doesn’t melt in the oven, so it is sweet and crunchy on top of the bun.  It can be bought online, but I didn’t have time.  Instead we made plain and almond ones (high salicylates and amines).  The base dough can be used for all sorts of buns – plain, filled, etc..  I used a vanilla filling this time, but you can use anything as the filling.  I adapted the bun recipe from a booklet called “Bullfest, Baka Godare Bullar Med Kaffegrädde”, which means “Bun Party, Bake Better Buns with Coffee Cream”.  Coffee cream is a 10-12% fat cream that is used for coffee drinking (hence the name), but as we don’t have that here I just substituted for a combination of milk and pure cream. 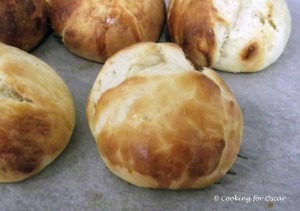 Refer to the recipes for the Basic Swedish Bun Dough and Vanilla Sugar.

Almonds are High in Amines and Salicylates.

Pearl sugar is a coarse sugar crystal that doesn't melt when put in the oven.  It can be purchased online, but I don't know what the salicylate content is.

One Response to Buns for Easter, or Any Time!