By Oscars Mum | June 22, 2011 - 9:03 am |July 28, 2012 Amines, Dessert, Gluten Free, Low Amines, Low Chemical / Failsafe, Low Glutamates, Low Salicylates, Recipe
Hubby has been in the kitchen whipping up some warming winter desserts again.  The Butterscotch pudding recipe is from the Glute-free section of The Failsafe Cookbook, but he made it with regular flour instead.  He has also made a banana version – very yummy. 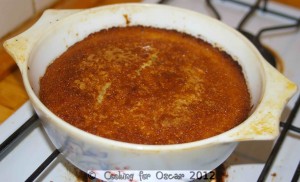 Use Nutelex and a milk alternative (e.g. rice milk) for a dairy-free version.

This recipe is based on the Butterscotch Pudding recipe in The Failsafe Cookbook.