Even though Oscar is eating unlimited amounts moderate salicylates we still have a lot of low chemical / failsafe foods as part of his diet to balance out the high and very high salicylate foods he is having regularly in small quantities.  These are usually at his day care centre where he has a list of morning and afternoon snacks that he can eat from their menu which contain some high and very high salicylates in small quantities, for example apple and blueberry muffins, banana bread (cinnamon), turkish bread (sesame seeds).  It means he can have the same foods as his friends more often and contributes to re-introducing those high level foods.

I found this recipe for Pear and Sour Cream Muffins at Wiltshire Online.  I only needed to replace the lemon juice, but made a few other tweeks as well; being made with sour cream they are very moist and stay that way for several days.  I made them a second time using some left over butter milk, but I didn’t have enough so added some rice milk – they were pretty good too. 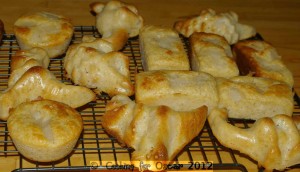