Best Ever Carob Cake (or Chocolate Cake without Chocolate)

Last weekend was my Dad’s 65th birthday, so the whole family was at Mum and Dad’s to celebrate.  My nephew has recently started on the elimination diet, so my Mum wanted to make a cake that he could have and was thinking of a carob cake.  I’ve been making chocolate cakes for my Dad’s birthday since I was a kid, and having recently discovered the best ever carob cake recipe I offered to make it.  I found the original recipe on Food.com, which was called “The Ultimate Carob Cake” developed as a Feingold recipe.  I was a bit dubious about the title but was really amazed when I tried it.

This cake is so light and moist and will keep for several days (if there is any left!), and it has a really lovely flavour.  I halved the amount of sugar in the original recipe and used half wholemeal flour, I also substituted decaf coffee for the real thing.  I used an old-fashioned jam and cream filling and topped it off with the carob butter cream icing from the Friendly Food book.  The result was delicious and it received lots of good comments.

Best Ever Carob Cake with Jam and Cream Filling 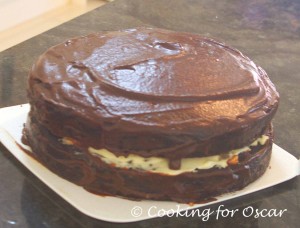 Best ever carob cake with jam and cream filling

This cake is very moist and light and keeps well for two to three days.  It also makes very nice cupcakes (bake for 15 to 20 minutes) and can be made as a single (very) large cake (bake for 50 minutes) and decorated with sifted icing sugar.

Happy Birthday Dad.  We love you!