By Oscars Mum | September 17, 2011 - 6:26 am |November 7, 2012 Dairy Free, Dessert, Low Amines, Low Chemical / Failsafe, Low Glutamates, Low Salicylates, Recipe
A few months ago a friend loaned me the most amazing book – Raw Food by Erica Palmcrantz and Irmela Lilja.  As the title suggests, everything is raw.  At first I thought this would mean salads and such, but its a whole lot more.  There are all kinds of recipes – porridge made from fruit, cream made from nuts, pasta made from strips of raw vegetables, pie crusts made from nuts.  Being raw the ingredients consist mainly of fruit, vegetables, nuts and seeds, which didn’t sound promising considering these are mostly high in salicylates.  However, once I looked more closely I realised there were a number of recipes that I could adapt to use moderate salicylate foods.

This recipe is my first attempt at Raw food and it was OK as it was, except I switched to vanilla extract rather than paste.  It made a good impression all round.

The one thing I don’t get about this book is how people can eat raw food all year round – including in the very cold Swedish winter! 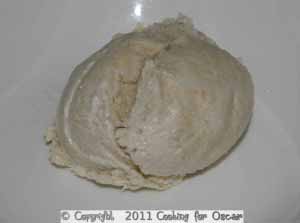