As a result of making hot cross buns for Oscar over the last few weeks, I have a large container of yeast that has hardly been used.  Last year, in the same situation it didn’t get used and was thrown out when the best before date passed (in December!).  This year I’m going  to make an effort to use it up, so there will (hopefully) be some baking recipes posted in the coming months.

I decided to start off by pulling out my pile of Swedish recipes (I was an exchange student there when I was 16) and found a nice simple recipe for custard filled buns – Vaniljbullar (Vanilla buns).  Swedish baking is wonderful; they have some of the best buns because of all the spices they use, but this one has only vanilla.  The recipe is from a pamphlet called “Svenska Folk Baka Mera”! (Swedish People Bake More!) and it was a good work out for my brain to translate it into English, which must have been OK as the buns turned out delicious.  I took most of them to work the next day and they were all gone in 10 minutes.  There was no problem substituting dry yeast for fresh, and I also made them with Nutelex since I had run out of butter (and was too lazy to go get some).  The recipe is very simple, and while the entire process takes a long time, there is nothing difficult about it.  The buns look more difficult than they are, so they are good for impressing people.

This recipe uses vanilla sugar, which I had completely forgotten about, but is really yummy in baking and easy to make.

Oscar helped me make the buns, and showed that he takes after his Mum, by photographing the process as we went. 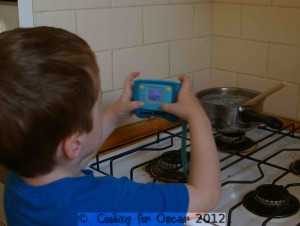 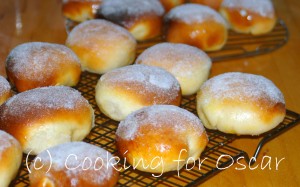 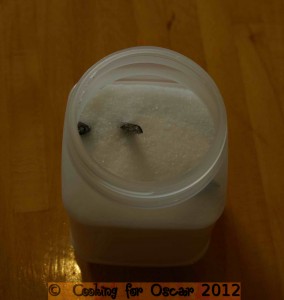 Vanilla sugar is easy to make and can be used in all types of baking and desserts.

Vanilla beans that have been cooked can be reused to make vanilla sugar.  Once the vanilla bean is removed from cooking, rinse it and pat it dry, then place into the container of sugar.