Breakfast is probably the most boring meal of the day in our house, especially week days when we have exactly the same thing each day.  For Oscar it’s porridge with maple syrup and banana or pear – he loves it (thankfully!).  So every now and then on the weekend we try something different.  The fluffy pancakes are a Jamie Oliver recipe that I saw on TV and he made them with pear, so I had to give them a go.  They can also be made with any other fruit, so are a good for food challenges and re-introduction.  The crumpets recipe was sent to me by one of my readers, Kim, and it took me ages to find the time to try them out, but when I did they were great.  They actually look a bit like english muffins, but muffins  are made with milk and eggs, but once cut in half these look more like what we know of as crumpets only they taste much better. 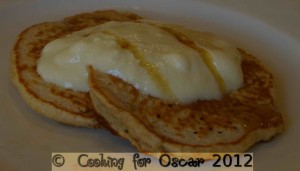 Variations: fill the pancakes with any fruit of choice in place of the pear 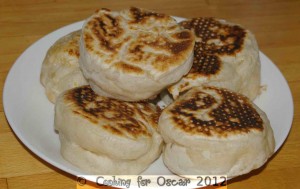