Last week Oscar had lunch box week at Day Care on two days.  He’s not going to school next year, but the younger kinder kids got to take part as well.  I’d had a few weeks notice of this, so I thought I’d start trying some things out early.  Luckily I did because each time Oscar ate 90% of the lunch box contents at morning tea!  So I bought the biggest one I could find – my husband called it the TARDIS – and he made it through the day with some food left over.  I think this has more to do with the fact that he eats far less food at Day Care than he does at home or when we are out together.  At home he eats non-stop all day, but he eats slowly – I think they hurry him up at Day Care!

The week before this I had made some chocolate yogo for Oscar from a recipe that had been in my “to try” folder for about two years.  I hadn’t tried it because the Yogo at the supermarket was fine for him, but the last few times we have bought it he has had a spoonful then complained that it makes his mouth feel funny and the rest goes to waste.  When he asked for it a few weeks ago we refused to buy it (followed by tears) so I pulled out this recipe and tried it.  The first time I made it I used half the cocoa suggested since I was using raw cocoa and it was very chocolaty and quite sweet.  The second  time I used carob powder, the full amount and reduced the sugar a bit, I also used rice milk.  The sweetness was better this time and the taste was very similar to the cocoa and milk version.  Oscar didn’t appear to notice any difference – and I didn’t correct his assumption that it was chocolate custard 🙂 .

The first lunch box was taken with us to the Children’s hospital when I took him to emergency at 7 am for a bent thumb (now known to be trigger finger).  I didn’t know how long we would be there, but thought this would last until the afternoon at least.  He wasn’t allowed to eat until we were discharged at 10 am, and the box was emptied by 10.30!  This is what it contained: 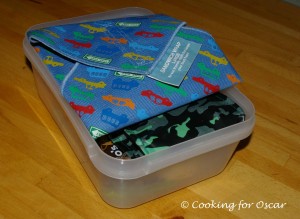 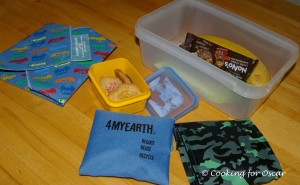 A few days later we headed to the outer edges of Melbourne to look at a display home, and took some morning tea and lunch with us.  This time the lunch box contained:

And yep, it was just enough for morning tea! 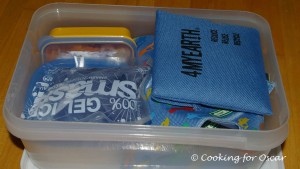 When we went back to the Children’s hospital for an outpatients appointment I packed a lunch box for morning tea.  The only thing he didn’t eat was the sweet potato chips (he gave them to me – yum!). 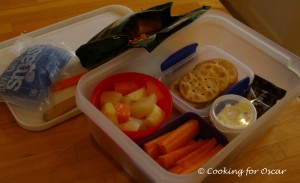 The weekend before lunch box week I asked Oscar what he wanted to take, and this is what he chose:

I think there had been some discussion at day care about what should go in the lunch box!  I’m all for children learning about healthy and unhealthy foods, but I do think it is overly simplistic to teach them that they can tell the difference based on the name of the food or it’s appearance.  We should be teaching children to question what is in their food and to judge the “healthiness” of food based on the ingredients that go into it.  The guidelines on the parent information for lunch box week listed muesli bars as examples of OK food, and cookies as not OK.   It’s not that simple – muesli bars (including the ones I make) tend to be stuck together with sugar, and while they will contain oats and other cereals I would never call them healthy.  A wholemeal cookie on the other hand, could have less sugar.  Which is one is healthy? 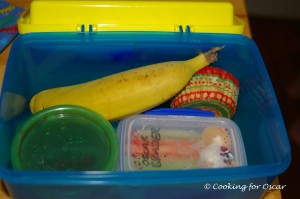 The second day he went, he made a few adjustments – no celery (it was a surprise inclusion to begin with) and a fruit cup (apple, paw paw and pear in pear syrup) instead of the custard.  There was a little bit of lunch box envy over grapes and apples.  The fruit cup was a comprise for the apple that he couldn’t take because he can’t peel them himself yet.  But on the whole he was pretty pleased with his lunch.

So it was a good effort all round.  I’m glad I’ve got a whole year left to practice though! 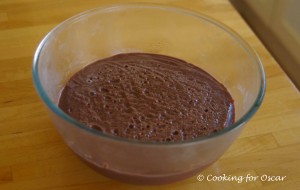 Use carob for a low chemical version, or cocoa if amines are tolerated.

Use tapioca or arrowroot instead of the cornflour for a gluten free version.

These last very well in lunch boxes with an ice block to keep them cool.

Individual yogos go well in lunch boxes, with an ice block to keep them cool.

Coming up Next Time: Salads for Summer and Christmas