Okonomiyaki is one of my favourite Japanese foods, and since coming home from Japan I have been wanting to make it.  Okonomiyaki is a Japanese vegetable pancake, made with cabbage and whatever else you would like to add.  Okonomi  means “whatever you wish” so it’s OK to make it with whatever ingredients you have and it is still authentic.  Okonomiyaki is served with Okonomi sauce and Kewpie Mayonnaise.  A mayonnaise substitute was easy, Okonomi was not.  Okonomi sauce is like a sweet and tangy BBQ sauce.  Searching for a substitute revealed many recipes using a combination of ketchup, soy sauce and Worcestershire sauce.  I couldn’t use any of those but I thought No-Tomato sauce would be a good start; but what to use for soy sauce and Worcestershire sauce?  Then along came Magic Sauce from Trish at Failsafe Foodie!  I knew it would work, and after playing around with quantities and adding a bit of Rice Malt Syrup for sweetness I had it.  I put both the sauce and the mayonnaise in squeezy sauce bottles so we could make the Okonimyaki patterns with them.  Hubby thought it was a pretty good substitute for the real thing and Oscar had no hesitation in covering his Okonomiyaki with it.

I used a couple of variations on Trish’s Magic Sauce  recipe – cornflour instead of tapioca and I made my own carob syrup.  The carob syrup recipe I used is from Cooks.com but I didn’t add any extra sweetener or the vanilla – just carob and water.  The okonomiyaki recipe and substitutes  I used are from Okonomiyaki World.  The recipe below is what I made; you can add any other vegetables or meat to the base mixture, or just have it plain.

I don’t have one of these big Japanese electric grills that my friend Kumi used to make Okinomiyaki for us, but an ordinary fry pan is just fine. 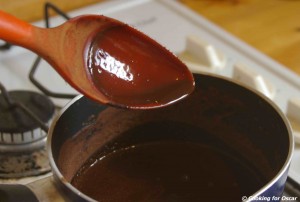 Asian-style sauce that is low in salicylates, amines and glutamates.

Refer here for the recipes for No-Tomato Sauce and Failsafe Foodie's Magic Sauce.

This is my version of Okonomi sauce for Oscar to have with Okonomiyaki, but it could be used anywhere that a BBQ style sauce is required. 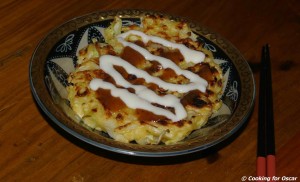 What you wish: (Optional)

Okonomi means "what you wish" so feel free to add any other finely sliced meats or vegetable to the basic mixture.

Home made bread crumbs can also be used instead of rice crumbs.

Refer here for recipes referred to above: